Technically speaking, the most poisonous animal in the world wouldn’t hurt you if it bit you - but it sure would be bad news if you ate it! Although we often use the terms interchangeably, the word ‘poison’ is primarily used for things that we eat or drink. Venom however is a whole other story and is found in a sting or a bite. So, unless you’re sitting down to lunch, it’s the most venomous animals in the world you should be worried about!

When it comes to venomous animals, there is no guessing the size or spitefulness of these harbingers of danger. Still, you have to marvel at the evolutionary pressures that provided a tiny spider with enough venom to drop a horse…

Here is a list of 10 of the most venomous animals in the world: 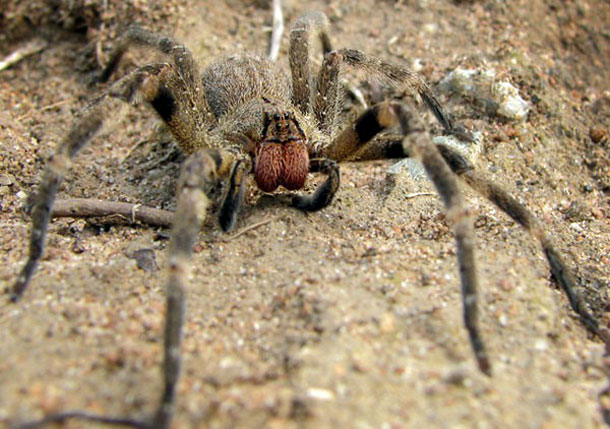 Let’s start off with a predictable creepy crawler. This nasty little chap hails from South America, and is also known as the Banana Spider, due to a tendency to hide in bunches of bananas. Both highly aggressive and venomous, the Guinness Book of World Records in 2010 declared it the most venomous spider in the world, noting calmly that an antitoxin is available. That might be a small consolation as you are holding a bunch of bananas in the supermarket, staring into its gimlet eyes! 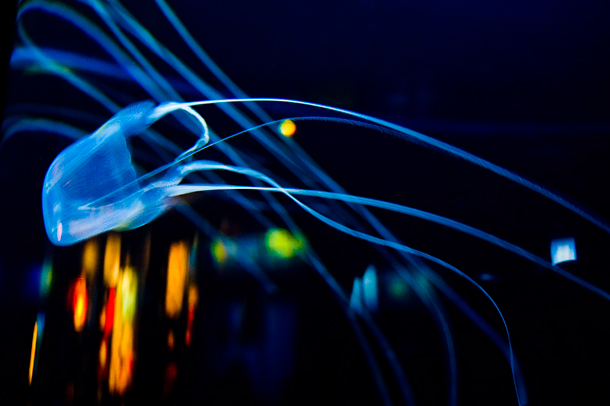 Everyone knows that no jellyfish sting is nice, but the Box takes it to new levels of discomfort. Found in places like Australia and the Asian seas, it is not unheard of for them to wander as far as California or the Mediterranean. The largest species of these jellyfish can cause death within two to five minutes. The more common experience is a longer period of illness with a rise in blood pressure, cardiac arrest, then death. It is worth remembering the pain too: apparently a simple brush of the tentacles feels like a lit cigarette being held to your skin. 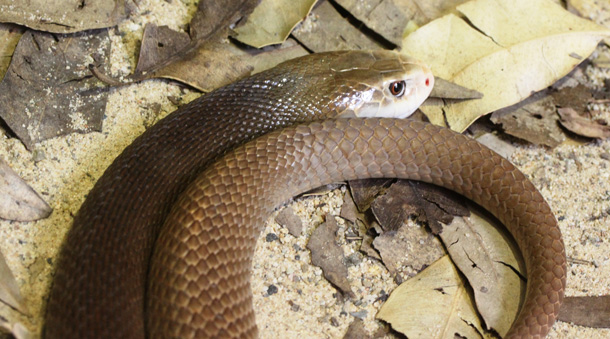 This snake seems very intimidating with the length of its body, its dark skin, and the chance you could stumble upon one at any time in the Outback of Australia. Certainly, the venomous Taipan is unparalleled, with one bite said to contain enough punch to kill one hundred humans. Fortunately for us, as they are usually found in fairly unpopulated areas, there have been no fatalities from their bite. 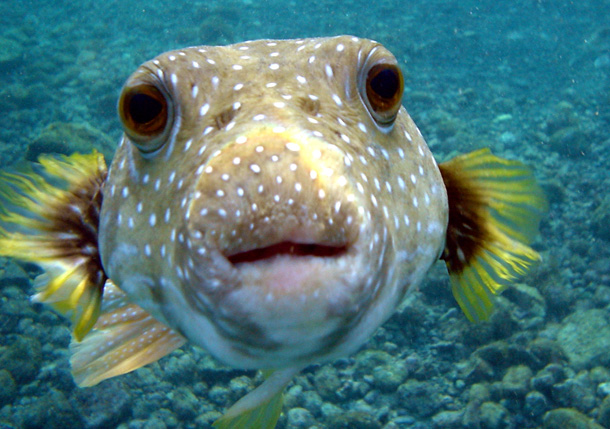 When at sea, any defense is a good offense. And the Puffer fish certainly takes this to heart. Hailing from the waters around Japan, China, and South America, when disturbed, it inflates, producing highly poisonous quills that stab predators or inattentive bathers. The Puffer also has a back-up trick: It’s flesh, liver, and muscles are just as toxic. When consumed, death is a certainty if no treatment is available. Surprisingly, its regarded as a delicacy in Japan, where it is known as ‘Fugu’. 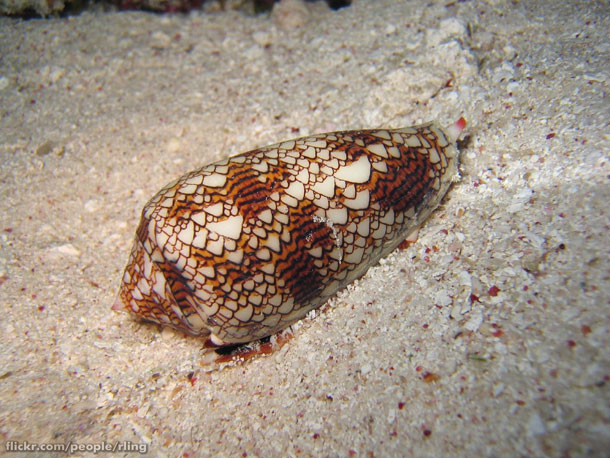 Snails can’t be dangerous, right? They sure can, if they are predatory, sea-borne and venomous. Existing in deep Indian Ocean waters, it’s not likely you will come across this creature, but they will ruthlessly assault mollusc prey. The venom causes inflammation, vision, and breathing problems. In fact, all varieties of cone snails are venomous, to some degree. 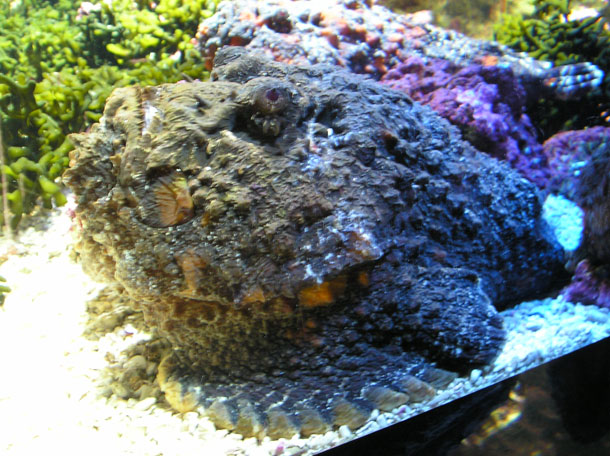 Another water-bound assassin, the Stonefish is found in the Caribbean and Australia. Taking its name from its cunning camouflage, it lies in wait until an unsuspecting person steps on it, and receives a hefty injection of venom from the dorsal fin. Known as one of the most dangerous fish, symptoms of a sting are tissue necrosis, swelling, muscle weakness and shock. The fact that they lurk in shallow tropic waters makes them a real danger to anyone just having a wade. 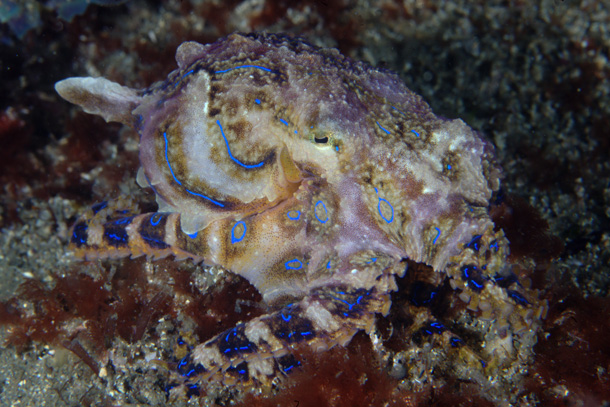 Yet another resident of the Pacific and Indian Oceans, these guys are typically pretty laid back. They hunt small crustaceans and mollusks, but when roused, its entirely likely that you could be stung by one of the world’s most venomous sea creatures, with a startling display of phosphorescent blue rings flashing at you. If it gets you, the prospects of loss of respiration and paralysis are very real, with a fatal potential. All from something no bigger than eight inches. 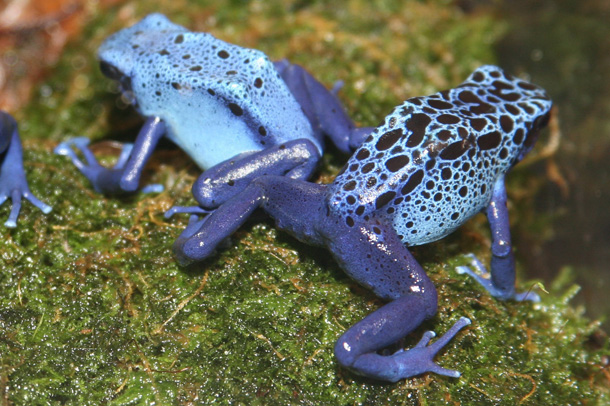 These cheerfully attired creatures live in South and Central America, where locals use their poison to tip their darts and spears. As any school child knows, when animals exhibit garishly bright colors, it is often a warning that they should not be eaten. However, just handling these little critters can be dangerous. 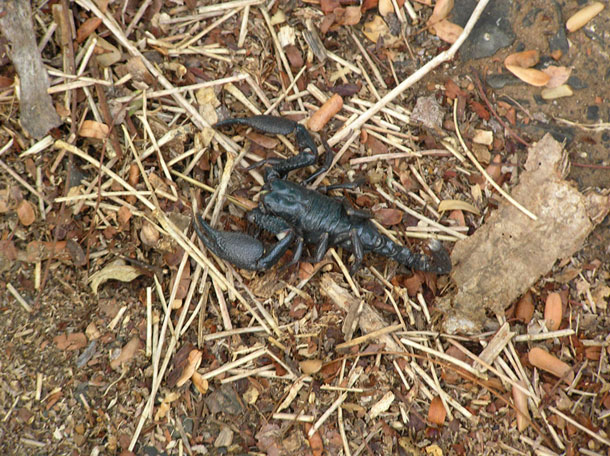 This dramatically named scorpion is from the Middle East and North Africa, and for such a small creature, it is equipped with an unusually fatal venom. The yellow scorpion’s sting is breathtakingly painful and causes pancreatitis, anaphylaxia, and death. It’s only saving grace is that it usually exists in the desert… so thirst might kill you before the scorpion does! 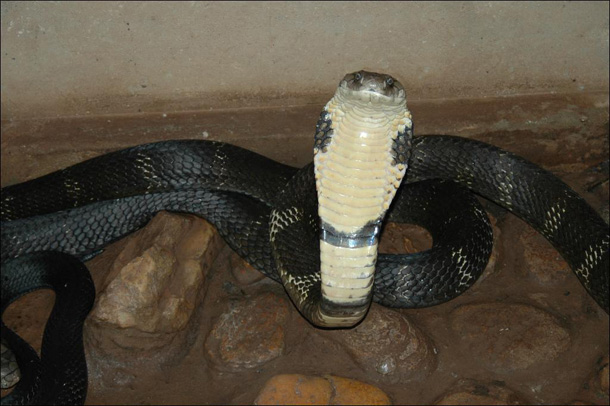 Time for a famous fear-inspiring reptile found primarily in India and South East Asia. As the longest venomous snake, the King Cobra is often claimed to be the most poisonous, though is not actually the case. Its method of attack is iconic and quick. With its hood unfurled, it spits out venom at it’s victim, causing immediate immense pain, which is potentially fatal if it enters the blood stream. Thankfully, they primarily hunt other snakes, but should certainly be avoided.

How Did Jimi Hendrix Die?
Extreme Cuisine - Delicacies Beyond the Pale
comments powered by Disqus
What's the Deal with Spicy Food?
Useful Enigmas - 3 Hidden Purposes of Your Dreams
The Dark Side of High-Speed Internet-5G Electrosmog
The Most Despised Corporations of 2017
Not All Biotech is High-Tech - The Biochar Revolution
Cannabis vs. Cancer - Toke for the Cure?
The Story Behind Planet Aid and the Clothing Bin Cult - Strange But True
How to Save the World with Essential Oils
How Climate Change Makes the Fire-pocalypse, and Vice Versa
Extreme Cuisine - Delicacies Beyond the Pale